Did you know, that this SDK was used to build Ozeki Camera Recorder?

If you don't want to write code, it could be just what you need. Download it now from the follolwing page: Download Ozeki Camera Recorder.

How to implement number plate recognition in C#

Difficulties of creating a capture from a number plate

To maximize the chance of effective license plate capture, installers should carefully consider the positioning of the camera relative to the target capture area. Exceeding threshold angles of incidence between camera lens and license plate will greatly reduce the probability of obtaining usable images due to distortion. Analyzing a live video stream or a picture is very time-consuming and sometimes does not produce any usable results. 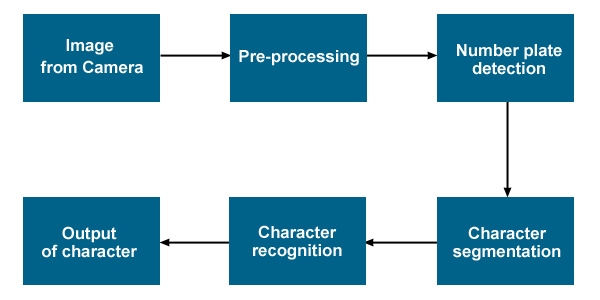 We need to complete four steps to recognize a number plate from a camera image.

A graphic user interface is built to make testing easier through each phase from the previous section. Each phase can be performed by clicking on a separate button, while the whole process can be performed by clicking one single button. Images obtained using this algorithm are shown one by another in the image-boxes. In the end, the recognized license plate characters are presented as a string inside the label in the lower right corner. The using of several integrated bitmap functions makes the image processing much easier. The functions are used for managing the pixel values and image cropping.